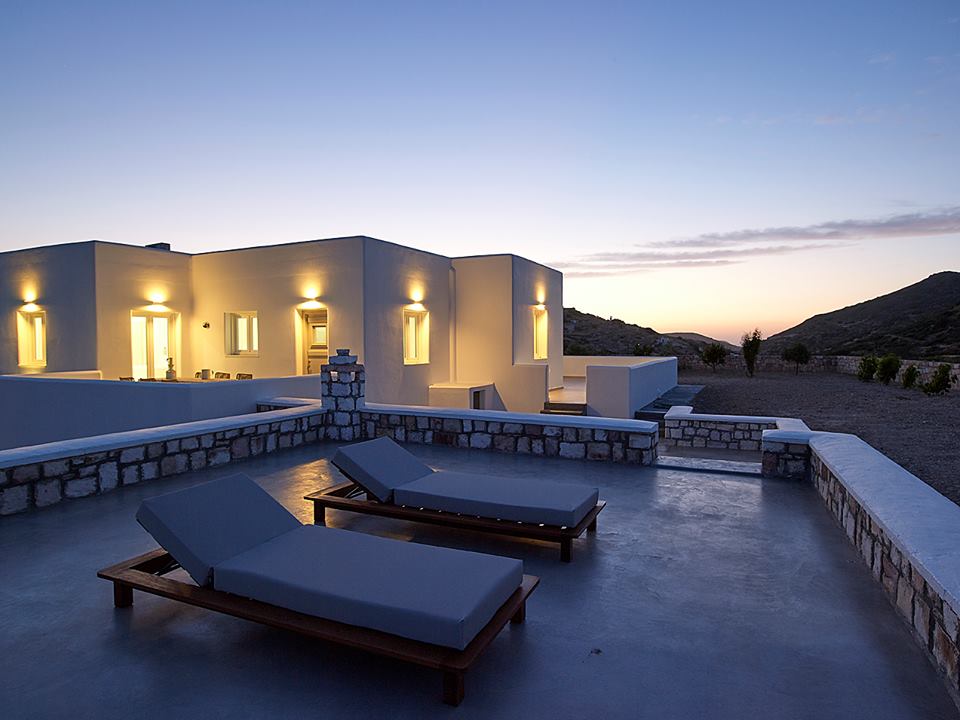 Indulge in the magic of the senses  The jewel of Triovasalos welcomes its eminent guests to a new world of unparalleled beauty and luxury. 190 sq.m unsurpassed comfort and austerity, the luxurious Villa Vipera embraces the Cycladic white with its sophisticated lifestyle in an exceptional architectural home. The villa has three bedrooms with king sized beds. Each bedroom has a built-in bathroom with a ceiling shower.

The large communal areas consist of a comfortable, elegantly decorated living room, a large wooden dining room and a fully equipped kitchen from where the residents can gaze at the endless blue. Furthermore, on the large paved private verandas, having a magnificent view of the Aegean Sea, you can relax and enjoy the warm Cycladic sunshine in our unique aesthetic sunbeds. Villa Vipera is the best choice for families, friends or couples looking for privacy and comfort in the idyllic Milos.

Milos is one of the most beautiful islands of the Cyclades, on the southwestern edge of the island, being the 5th largest island. It separates itself for the special Cycladic architecture and combines relaxation and recreation ideally. Indeed, being characterized as an inactive volcanic island, Milos is unique in landscapes with different species of rock that are subject of study by scientists from all over the world.The port of the island is in Adamas, while the capital is in the picturesque Plaka. As far as Triovasalos is concerned, it is a picturesque, densely populated village built amphitheatrically that attracts many tourists and the largest commercial movement of the island.

Its intense traditional and welcoming environment is an attraction for every traveler. In fact, it is 1 km from Plaka, the capital of the island, and 10 km from Adamas, the main port of the island. Located in the village are the church of Saint Spyridon, existing from 19th century, and the church of Agios Georgios in Pera Triavasalos, dating back to 1849. The temple has a marble iconostasis and mosaics in the courtyard.

At the entrance there is a marble slab depicting St. George on horseback. At Easter, the custom of "Judas Burning" takes place, during which a model of Judah burns, while dynamites are thrown into a field between Triovasalos and Pera Triavasalos.

From the very first moment of your arrival, the entire Villa Vipera team will be there to serve you, responding to your every wish, having as a sole purpose the fact of making your stay a unique holiday experience.

HOW TO FIND US

Thank you for browsing the official website of Villa Vipera

You can contact us completing the form below for further information or send your interest for a reservation.

Otherwise , you can contact us by phone at +302152159916 or by email at villavipera@gmail.com
Thank you very much for your preference. For any further information or assistance, please do not hesitate to contact us. We will be happy to assist you.
Contact Details
Villa Vipera
Pera Triovasalos, Milos, 84800, Greece
Email: villavipera@gmail.com
Tel: +302104515005